Last time ago we presented a model organism, the red flour beetle, and this week I’m introducing one more. Its name is Acyrthosiphon pisum, commonly known as pea aphid or sometimes pea louse or green dolphin. 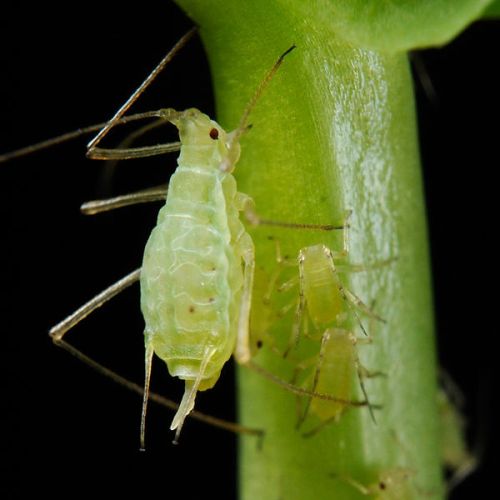 As it is usual with model organisms, the pea aphid has been deeply studied and therefore many curious things have been studied and discovered on it. A typical aphid, it feeds on plant sap, especially from legumes (family Fabaceae), including many forage crops, such as the pea, hence the name. As a result, it is a major agricultural pest worldwide.

Pea aphids are usually wingless, but when food become scarce they may produce winged individuals that fly to new food sources and colonize a new plant host. Such a complex life cycle makes them good models for the study of reproduction.

Another area in which the pea aphid is a good model is the study of symbiosis with bacteria. The bacteria Buchnera aphidicola is known to live in the aphid’s hemocoel (the body cavity in which hemolymph, insect “blood”, is found) and provides it with many essential aminoacids. Several other bacteria may be found living inside the aphid and they are able to have a profound influence in the insect’s physiology.

The pea aphid is one of the few animals known to be able to produce carotenoids, organic pigments usually produced by bacteria and plants (actually their chloroplasts, which are actually endosymbiotic bacteria). This ability may have been obtained by transference of bacterial genes to the aphid’s genome. Some time ago, it has been shown that pea aphids may use this carotenoids to produce ATP (energy-storing molecules) from sun light, a process similar to some kind of very primitive precursor of photosynthesis. It cannot be considered actual photosynthesis because there is no production (synthesis) of organic molecules using carbon dioxide.

Anyway, the pea aphid is nevertheless an astonishing little creature.

This work is licensed under a Creative Commons Attribution-ShareAlike 2.5 Generic License.