There are many spider groups that are well-known by the general public: tarantulas, jumping spiders, wolf spiders, orbweavers… but one of the groups with a very large number of species, the family Linyphiidae, is usually unnoticed.

Males and females are very similar in size, with males being slightly smaller. They can be easily distinguished by the abdomen and the pedipalps as in most spiders. Females have smaller pedipalps and a rounder abdomen, while males have larger pedipalps with a round expansion at the tip and slenderer abdomens.

The web of the black-tailed red sheetweaver, just like in other sheetweavers, consists of an horizontal sheet over which some additional threads above. Flying insects, when they colide with the threads, fall on the sheet and are captured by the spider.

The mating behavior of the black-tailed red sheetweaver begings with the male entering the female’s web. He usually cuts off part of the female’s web and deposits new web at the same place. After this, he approaches the female, touches all her legs with his two anterior pairs of legs, and then start the pseudopulation, in which he introduces the tubes of his palps into the female genitalia but, as they are still empty, fertilization cannot occur. After some time playing like this, the male builds a small triangular web sheet and deposits a drop of sperm on it. He then collects the sperm with his pedipalps and approaches the female once more, this time breeding her for sure.

Again, the ecology and life-history of the black-tailed red sheetweaver is not very well studied. And the same is true for almost all species in the family Linyphiidae, even though it is the second largest spider family on the planet. They are too tiny for most of us to care.

This work is licensed under a Creative Commons Attribution-NonCommercial-ShareAlike 4.0 International License.

This work is licensed under a Creative Commons Attribution-NonCommercial 4.0 International License.

Half male, half female: the amazing gynandromorph animals

In dioic species, i.e., those in which males and females are separate organisms, sexual dimorphism is very common. It is usually possible to say whether an individual is male or female through external caracteristics, such as color pattern, size or proportion of different body parts. 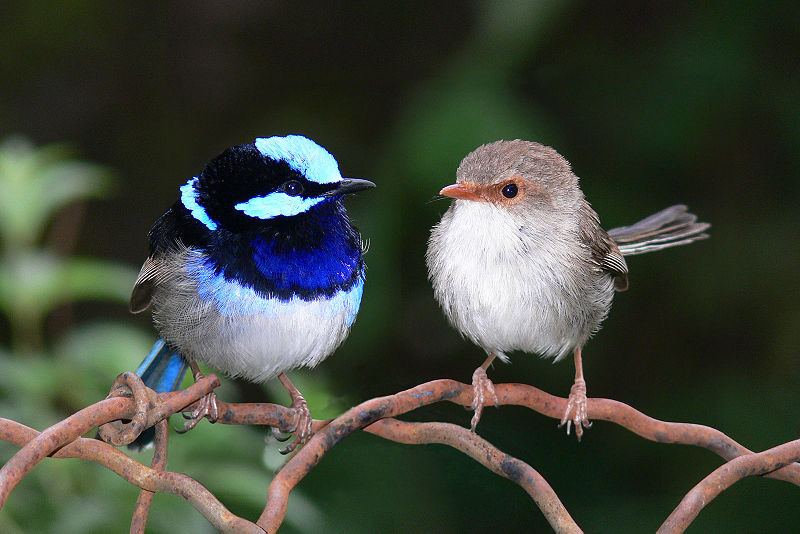 Vertebrates and arthropods are certainly the two phyla in which sexual dimorphism is best known and found very often. See, for example, the birds above and the spiders below. 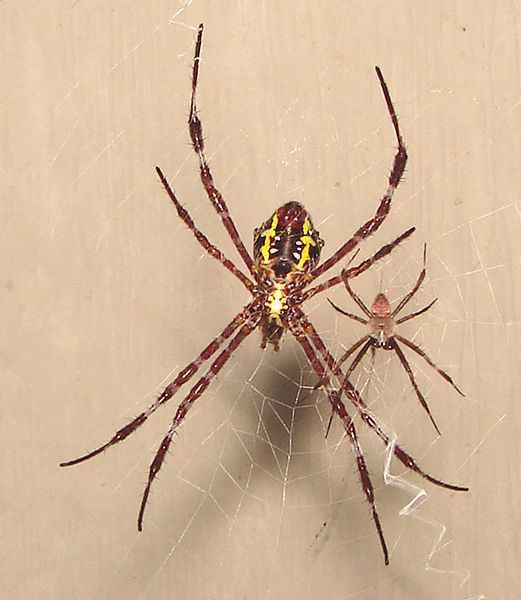 A female (left) and a male (right) of the spider Argiope apensa. The difference in size is more than evident. Photo by Wikimedia user Sanba38.*

The mechanisms that lead to sexual dimorphism are usually the same that lead to the differences in sex by itself. In mammals, birds and arthropods, it is usually due to differences in chromosomes. In other groups, such as crocodiles and snakes, it may be simply a matter of incubation temperature. It is not uncommon to find deviations from this “ideal” dichotomy, with organisms showing unusual chromosome combinations or other features that originate intermediate forms, such as hermaphrodites or androgynous individuals. We have a lot of this in our own species!

There is, however, a much more intriguing and astonishing male-female blend that is often found in arthropods. Known as gynandromorphism, this phenomenon creates specimens with mixed male and female characters forming a mosaic in which one part of the body is male and the other is female. And this distribution is usually bilateral, with one side of the body being male and the other being female. 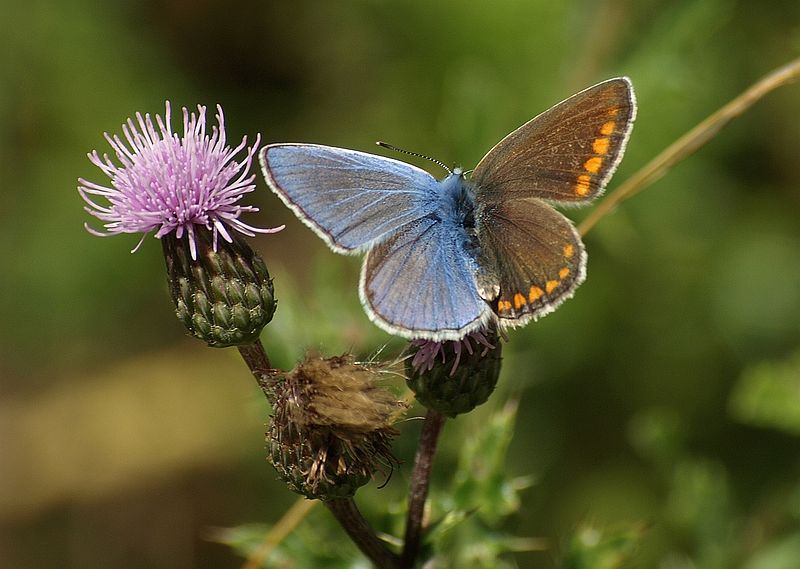 Gynandromorph of the common blue (Polyommatus icarus). Male on the left side and female on the right side. Photo by Burkhard Hinnersmann.*

Gynandromorph of the Malaysian stick insect (Heteropteryx dilatata). Male on the left side and female on the right side. Photo by Wikimedia user Acrocynus.*

A recent paper by Labora & Pérez-Miles (2017) describes the first report of gynandromorphism in a mygalomorph spider (i.e., a tarantula). As the images are not distributed in an open access or creative commons licese, I cannot publish them here, but you can read the article for free thanks to our most beloved god, SciHub.

The causes of gynandromorphism are not always clear, but most of the times it seems to be due to a chromosome impairment in mitosis during the first stages of embryonic development. Thus, it is more likely to occur in inviduals that were originally heterogametic, i.e., they had two different sex chromosomes in their zygote. 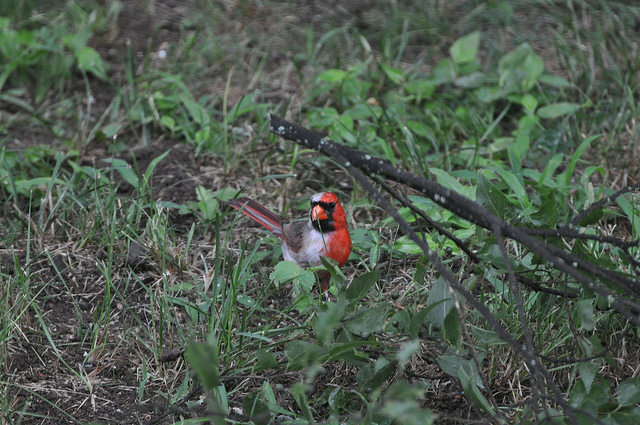 Gynandromorphism should not be confused with chimerism, a somewhat similar phenomenon in which an individual is the result of the fusion of two different embryos.

Now tell me, isn’t nature fascinating in every single detail?

Olmstead, A. W.; LeBlanc, G. A. (2007) The environmental-endocrine basis of gynandromorphism (intersex) in a crustacean. International Journal of Biological Sciences 3(2): 77–84.

This work is licensed under a Creative Commons Attribution-NoDerivs 2.0 Generic License.

If you think spiders are scary creatures, today you will learn that they are scared too. But what could scary a spider? Well, a web bug!

We usually think of spider webs as an astonishing evolutionary achievement of this group of arachnids and a very efficient way to capture prey without having to pursue them. Webs are sticky, resistant, and only spiders themselves can move freely through them. The only problem is that this is not true. 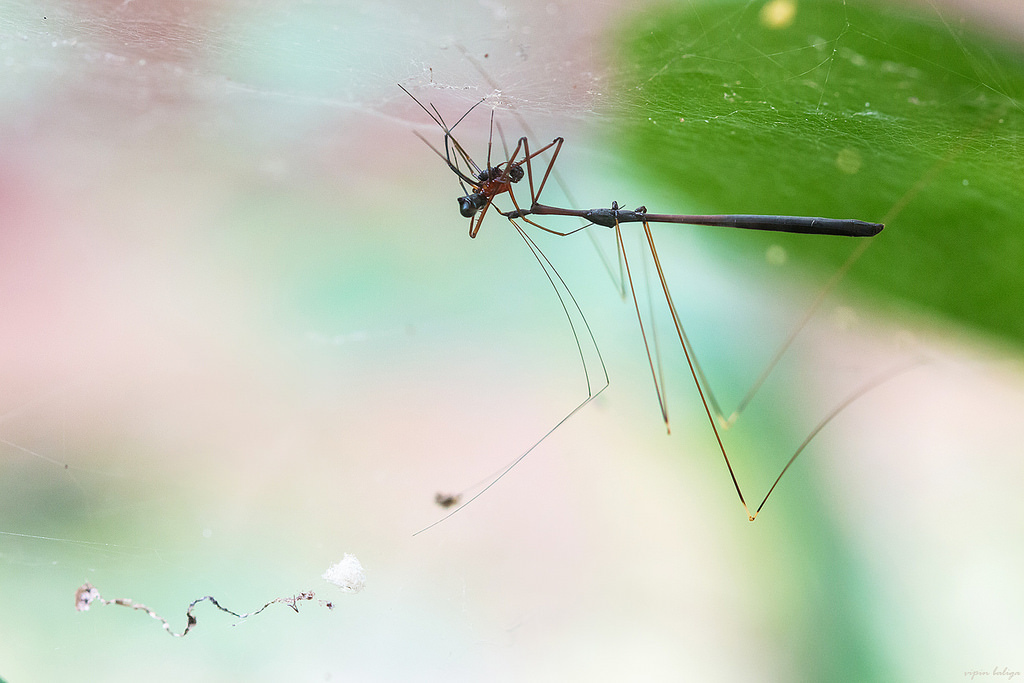 A thread-legged assassin bug (Emesaya sp.) feeding on a spider after invading the spider’s web in the Western Ghats, India. Photo by Vipin Baliga.*

A group of bugs that conquered the spider world are the so-called thread-legged assassin bugs, which comprise the subfamily Emesinae of the assassin bugs (family Reduviidae). As the name implies, the assassin bugs are a group of true bugs (suborder Heteroptera) that are expert killers of other creatures.

During their evolution, the thread-legged assassin bugs seem to have acquired a special taste for spiders and throughout the world they are usually associated with these eight-legged predators. In many cases, such as the one seen in the picture above, the bugs prey on the spiders, having developed the ability to move through the webs. They usually produce vibrations on the web that attract the spiders. Those, thinking that they caught a prey, are lured directly to their death in the legs and proboscis of the terrible bug.

Some thread-legged assassin bugs have, however, found another way to harass spiders: by stealing their food. In the latter scenario, the bugs usually wait close to or on the spider’s web and, when an insect is caught, they steal it from the spider by ripping it off the web. This kind of behavior is called kleptoparasitism, which means “parasitism by stealing”.

But how can spiders avoid this bug nightmare?

Until recently, it was thought that spiders were safe inside caves. Although emesinid bugs do occurr in caves, their association with spiders seemed to be weaker or non-existent there. But new findings are revealing that they pursue our arachnid fellows even to the deepest abysses of Earth.

The earliest cave-dwelling thread-legged assassin bug known to prey on spiders is Bagauda cavernicola, from India. Its spider-eating habits are known since the first decades of the 20th century.

The second species, Phasmatocoris labyrinthicus, was found almost a century later, in 2013, in Arizona, USA. More than only preying on spiders, such as the species Eidmanella pallida that lives in the same cave, P. labyrinthicus seem to have developed the ability to manipulate abandoned spiderwebs and use them to detect and capture prey for their own consumption. Only a single instance of such a behavior has been recorded and the species’s behavior needs further studies. 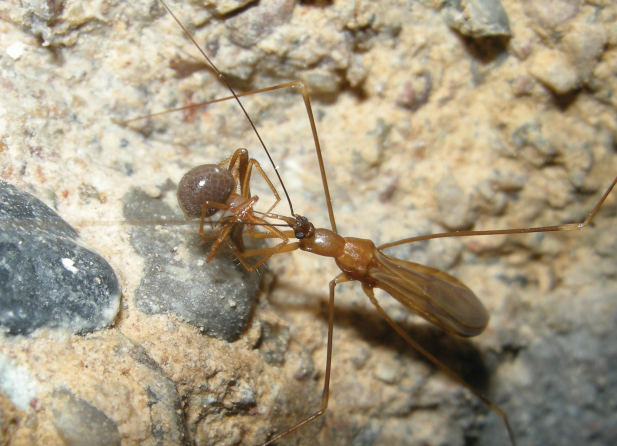 Now, only 3 years later, there are new evidences of more thread-legged assassin bugs molesting spiders in caves. And this time the observations were made in Minas Gerais, Brazil. One individual of the bug species Emesa mourei was seen standing on the web of a recluse spider (Loxosceles similis) while the spider was at the web’s edge. Another specimen of E. mourei was seen feeding on a fly near the web of a pholcid (cellar spider). The fly and the legs of the bug had vestiges of silk, indicating that the bug stole the fly from the spider. Another bug species, Phasmatocoris sp., was observed on a web of the cellar spider Mesabolivar aff. tandilicus. If this species of Phasmatocoris manipulates spider webs the same way that P. labyrinthicus seems to do is something yet to be investigated. 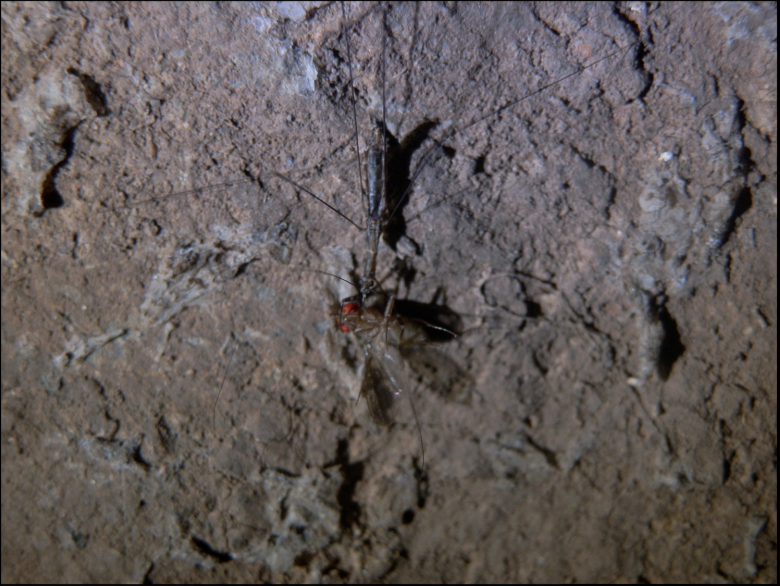 Nymph of Emesa mourei feeding on a fly that it apparently stole from a pholcid spider in the cave Lapa Arco da Lapa, Minas Gerais, Brazil. Photo by Leonardo P. A. Resende, extracted from Resende et al., 2016.

With three different and very distant records of thread-legged assassin bugs associated with spiders in caves, it is clear that the poor arachnids cannot get rid of those bugs even if they run down into the bowels of the Earth.

Wygodzinsky, P. W. 1966. A monograph of the Emesinae (Reduviidae, Hemiptera). Bulletin of the American Museum of Natural History, 133:1-614.

This work is licensed under a Creative Commons Attribution-NonCommerical-NoDerivs 2.0 Generic License.

Spider are famous for being horrible creatures, atrocious predators with terrible venom and creepy webs. But that’s not quite true once you start to know them well, but, anyway, they used to be considered a group of animals composed solely by predators.

That’s not true anymore. In 2008, it has been found that a small jumping spider is predominantly vegetarian! Its name is Bagheera kiplingi, or the Kipling’s Acacia Spider, and it is our newest Friday Fellow. 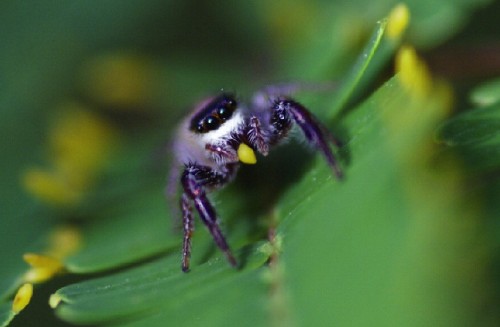 The Kipling’s Acacia Spider is found in Central America, in Mexico, Costa Rica and Guatemala. It’s a jumping spider (family Salticidae), the most diverse family of spiders.

Living on acacia trees, the Kipling’s Acacia Spider feeds mainly on Beltian bodies, small structures at the tip of the Acacia’s leaflets that are rich in proteins, sugars and fats. The Beltian bodies are a food source for ant species of the genus Pseudomyrmex that live in a mutualistic relationship with the acacias, protecting the trees from herbivores.

Our spider most likely became an oportunist by exploring a resource that was not designed for it. And more than that, sometimes the spider can attack and eat the ants, especially their larvae, so becoming a kind of annoying disturbance to the mutualistic relationship between ant and tree.

However, despite the fact that it also feeds on ant larvae, Bagheera kiplingi has the Beltian bodies as its main food source. Ironically, the name Bagheera comes from Rudyard Kipling’s character Bagheera, which is a black panther. The specific epithet, kiplingi, honors Rudyard Kipling himself.