We’ll continue among the unicellular marvels of the sea this week. This time our fellow is another member of a poorly known but hugely important group of protists, the coccolithophores.

The coccolithophores are a group of unicellular algae of the marine phytoplankton that is characterized by a series of calcium carbonate plates, called coccoliths, that cover their body, making them look like cells covered by scales.

Today we’ll know the most widespread and abundant species of this group, Emiliania huxleyi, usually simply called Ehux, which I will use here as its common name. 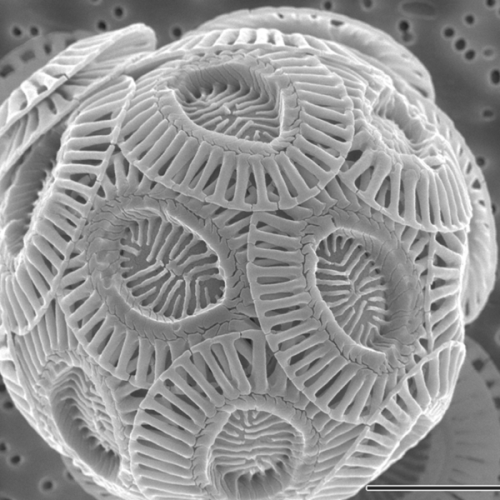 Ehux is found in the oceans all around the world, being absent only close to the poles. According to the fossil record, this species appeared about 270 thousand years ago, but became the dominant coccolithophore only anout 70 thousand years ago. Due to its abundance, Ehux is an important species controling global climate. As a photosynthetic organism, it helps to increase atmospheric oxygen and decrease carbon dioxide. Additionally, the fact that its cell is covered by calcium carbonate plates increases even more its importance in removing CO2 from the atmosphere. By capturing CO2 as calcium carbonate, Ehux send it directly to the ocean floor when it dies and the shell sinks.

The life cycle of Ehux is not yet completely understood, but includes at least two different cell forms. The C form is spherical, nonmotile and covered by coccoliths (hence the name C) and can reproduce asexually by fission. Another form, called S (scaly) lacks coccoliths but is covered by a group of organic scales. This form is motile, swimming using two flagella, and also reproduces asexually by fission. How one form turns into the other is unclear, but there are some evidences that the C form is diploid and the S form is haploid, so C cells could turn into S cells by meiosis and two S cells could act as gametes and fuse to produce a new C cell. A third form, called N (naked) cell is similar to a C cell but is unable to produce the coccoliths. It is assumed that they appear by a mutation of C cells that makes them lose the ability to produce coccoliths, as N cells never change back to the C form.

A bloom of Ehux south of Great Britain as seen from a sattelite photo. Credits to NASA.

During some special conditions, such as high irradiance, ideal temperatures and nitrogen-rich waters, Ehux populations can cause blooms which extend over large portions of the ocean. This species is known as a producer of Dimethyl Sulphide (DMS), a flammable liquid that boils at 37°C and has a characteristic smell usually called “sea smell” or “cabbage smell”. The release of DMS in the atmosphere interferes in cloud formation, so that this is one more way by which Ehux influences global climate.

This work is licensed under a Creative Commons Attribution 2.5 Generic License.